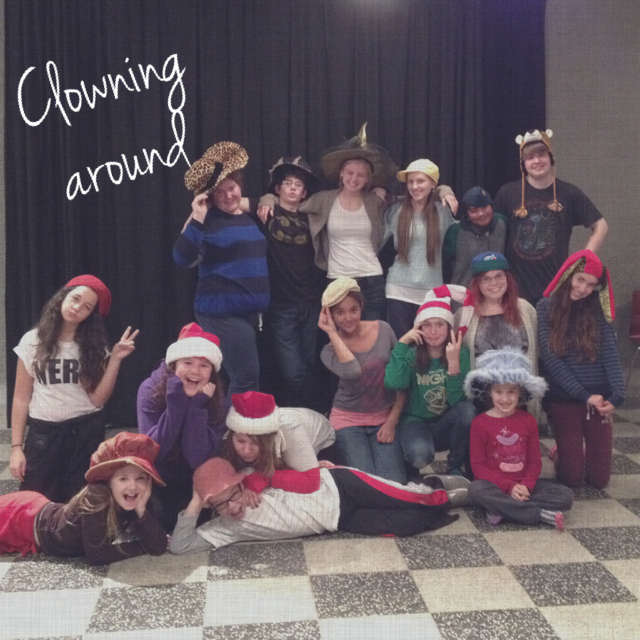 I had the opportunity to teach two classes over at the Palace Theatre with the LYTE at the Palace actors!  LYTE holds a special place in my heart, as it’s where I got my start in London theatre back in 2008!  The LYTE program has grown considerably since I worked on it — it’s expanded from a small summer camp to a year-round program for young actors.

I taught two groups of LYTE actors, today and yesterday.  It was kind of a broad mish-mash of topics, including drama games, tableau, mime and clown technique (hence the funny hats!).  As always, I started the evening with a physical warm-up of dancing.  I also made a complete idiot of myself on the first night by promptly falling right on my butt while doing some sort of slide move.  It was pretty spectacular.  But there’s a lesson in and of itself — in theatre, something often can and does go wrong.  And if something goes wrong, just pick yourself up and keep on going!

I love that the LYTE kids weren’t afraid to get up, be silly, try new things, and experiment.  They really took all the instructions and ideas I gave them and made them their own.  That’s so important to me as a teacher — I don’t care if my students are good at a particular task or not right away.  They have time to practice and perfect their techniques.  What I care about is that they’re willing to try their best, make mistakes, and keep going.

I’m really pleased and impressed with the participation and enthusiasm that the LYTE actors showed me.  It was a pleasure to work with them!  So congratulations, actors, and thanks for playing with me!

2 thoughts on “Fun times with LYTE at the Palace!”