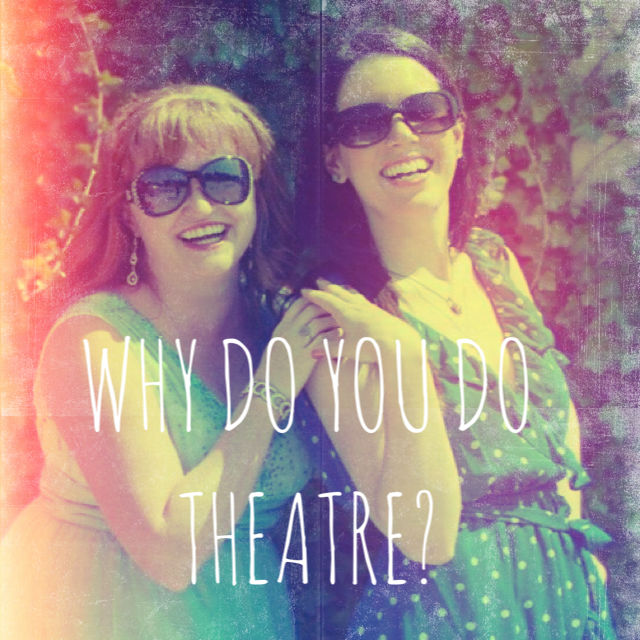 The long hours and time away from my family, the drama, the stress… sometimes I wonder why on earth I do theatre.  I have gone weeks at a time where I hardly see my husband, the house becomes a disaster area, I’m exhausted and I run out of clean clothes and fresh groceries.  Yet despite all that, I still do theatre.  And so do the wonderful people below… read on for their reasons!

“I think it helps instill empathy in people. After playing so many different characters with different backgrounds, I think it makes me more understanding. The world would be a much more courteous and friendly place if everyone did theatre…  TV & movies cannot (as accurately) share & present true human emotion, action, reaction and thought. TV and movies are edited and “touched up” before being published. Theatre is in the moment and true to events which occur.” — Heather May

“Theatre is my therapy. Thoughts, emotions, behaviours, etc. I wouldn’t be comfortable exhibiting or be able to express elsewhere find homes in the rehearsal hall & on stage. I can work through things in rehearsal and performance easier than I can in “real life,” if you will…  Theatre, and its creation (at least in part,) by my hands is something I can easily take an enormous amount of pride in without feeling guilty in any way. Even if it’s crap, it’s something you helped bring to life. And that ain’t nothin’.” — Kaitlyn Rietdijk

“The challenge and for the longest time it was my only creative outlet.” — Lisa DesGroseilliers

“Oscar Wilde sums up my thoughts rather neatly with this quote: ‘I regard the theatre as the greatest of all art forms, the most immediate way in which a human being can share with another the sense of what it is to be a human being.'” — Kristin Thomas

“The fun and challenge, camaraderie, where else would I meet folks as crazy as me – aside from my family.” — Ellen Mallett

“The relationships with the cast and crew, the ability to safely (it’s only for three months, after all) dig into myself to find parts of me I haven’t accessed before, the sense of accomplishment, the fun of being on stage!!” — Steve Ogden

“Theatre is a beautiful outlet.  The people are what make community theatre so fantastic. Spending so much of your time with the same group of people during the rehearsal process and run of a show can really make us feel like family, and that’s the best part.” — Steph Molloy

“There is nothing else I’d rather do with my life than act, sing dance, quote musical theatre, perform duets as a solo, fangirl over broadway (which over 1/2 of my friends don’t understand), and work with the most amazing people on the planet!!!” — Lisa Craig

“I like the challenge to portray each character.” — Peter Nye

“The great people I get to hang out with who know how to play and have fun (including my family).” — Tania Harvey

“Because I’m addicted. It’s a drug. But a good one!” — Meredith Blakeney

Why do YOU do theatre?  Share in the comments!

One thought on “Why Do You Do Theatre?”