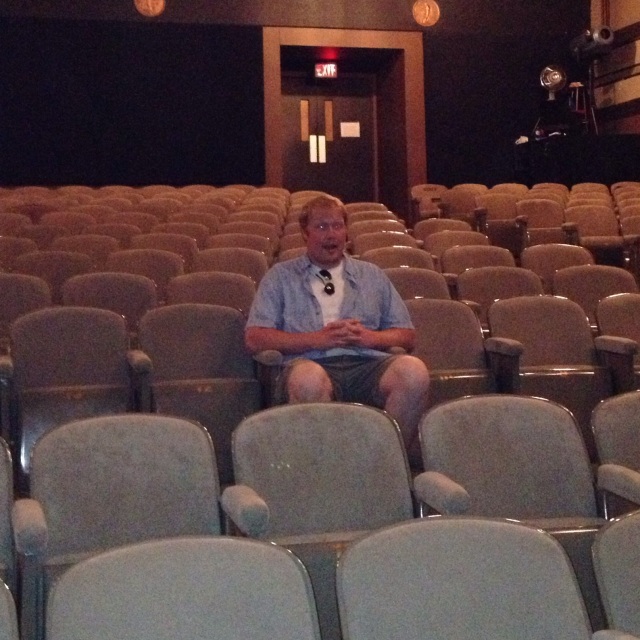 Shawn is ready for the show to start!

I’m going to assume that most people know the “basics” of being a good audience member… things like turning off your cell phone, not unwrapping crinkly candies during the overture, and the like.  Ceris wrote a great piece at TLTDAY.com about theatre etiquette for parents — check it out.

But I’m going to delve a little deeper into being a good audience member, and hopefully share some things that you may not have thought of.

1.  This one may sound like a no-brainer, but… allow yourself time to get to the theatre and get situated.

There are actually a lot of things you can/should do before going into the auditorium and sitting down… you need to pick up your tickets at will-call if you don’t have them yet (you can’t get in without your tix!), use the restrooms before the giant line-ups begin (especially for the ladies’ room!), get a snack or beverage at the concession stand, peruse the headshots or production photos in the lobby, read through your program, and get yourself in the right mindset for the show you’re about to see.  Now, don’t write me off as all artsy-fartsy or airy-fairy about that last point.  If you’re rushing in at the last minute, you’re totally not in the “let’s enjoy a show” mindset.  You’re in the “OMG traffic was nuts I’m going to be late where is my cell phone I have to pee but there isn’t time I can’t get my arm out of my coat sleeve” mindset, and you’re going to be totally stressed out and out of breath.  You definitely won’t enjoy the show as much as you would have if you weren’t feeling rushed.

2.  Sit back in your seat, and sit up straight.

Your mom probably has bugged you before about not slouching and having good posture.  And here’s why*: audience seats are usually set up in a way that are slightly diagonal to the row in front of and behind them.  This is so you can see between the window of space between the heads of the people in front of you.  You may be totally engrossed in the performance and leaning forward to get a closer look, or you may be on a hot date and want to rest your head on your beau’s shoulder, but you’re wrecking the view for the people behind you.  Especially in the first case, if the audience is raked (angled) slightly down, you will totally block the view.  So sit up straight and sit back in your chair.  You can snuggle after the show.

*Your mom also probably wanted you to sit up straight so you wouldn’t grow up to be a hunchback… but go with me on the whole audience thing.

3.  No matter how sneaky you think you’re being, other audience members AND the actors onstage can see you.

During the run of The Three Musketeers at the Palace Theatre, I had the misfortune of seeing a couple getting, let’s say, frisky, in the audience.  The couple was seated way to the side with no other patrons near them, so they probably thought they had some privacy.  Trust me… us actors got quite the eyeful up onstage during the ball scene!  I also remember a particular disheartening event during the run of No Traveler Returns; both myself in the audience (as the director) and the actors onstage noticed a man who fell asleep in his seat during the first act of the show.  How depressing is that, to feel like your show is putting your audience to sleep?!

Do you have any tips about how to be a great audience member?
Share them in the comments!

And be sure to check out my other articles about theatre etiquette!

10 thoughts on “Theatre Etiquette: How to Be a Great Audience Member”