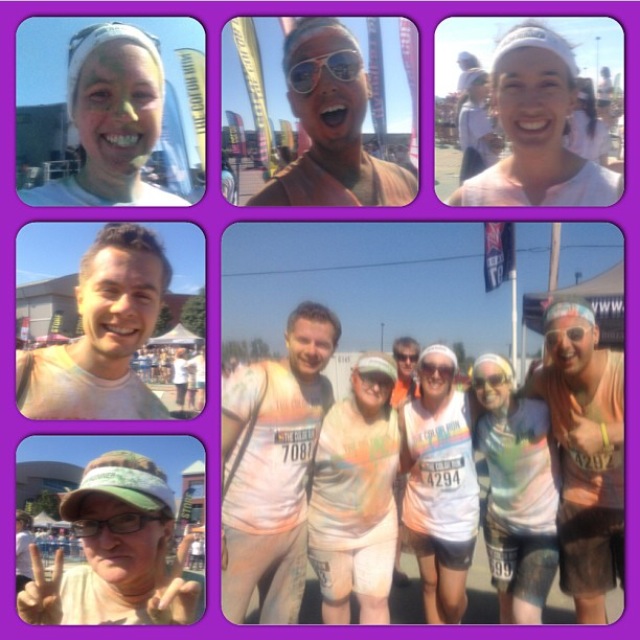 I can tell that spring has truly sprung because I’m getting super excited to be outside and running!  Yesterday I signed up for the Run for Ovarian Cancer, and today, thanks to being on the VIP list, I signed up for The Color Run London!

Despite the non-Canadian spelling of “colour,” I participated in The Color Run last year, and it was SO much fun!  I ran with my friends Ceris, Brandon, Monica and Matt and we just had a great time.  I say “participated” because I didn’t run the race… I jogged, skipped, frolicked and boogied through the race!  I really feel like the point of The Color Run is not to aim for a personal best — it’s totally to get covered in colour!

I’ve created a team that anyone can join, called Rainbow Connection!  If you’d like to join the team, let me know!  Send me an email, shoot me a Facebook message, or leave a comment here!

If you’ve never participated in The Color Run before, here are some handy tips that I learned from last year!

1)  Get there early.  I arrived a few minutes before the run was supposed to start, and got stuck in the second-to-last wave of the event, which meant I was stuck waiting a loooooong time.  Come early and join in the party!

2)  Bring eye protection.  This can be as simple as a pair of sunglasses, but goggles aren’t a terrible idea either.  One particularly enthusiastic volunteer at the yellow colour station got me right in the eye with the powder.  It’s non-toxic, but it’s still not fun having powder in your eye.  Luckily Brandon had a bottle of water, which I basically poured all over my face to get the powder out.

3)  Bring cash.  There’s tons of gear for sale at the event (including bags, tutus, bracelets, etc), as well as extra colour pouches.  They had debit last year, but cash is obviously faster.

4)  It’s not actually a 5k.  I measured the distance last year, and it ended up being way shorter — closer to a 3.8k.  So it’s great for a first-time runner, or for kids!

5)  Green is the hardest colour to get rid of.  The colour stations that you go through are blue, pink, orange and yellow.  Like I said above, you can purchase extra colour pouches, such as green and purple.  The colour was fairly easy to get off in the shower (although I did use a pumice stone and Lush Ocean Salt scrub for some of the harder-to-clean areas) but green definitely stayed on the longest.

So I hope this gets you excited to get colourful, and I hope you’ll join me for The Color Run 2014!