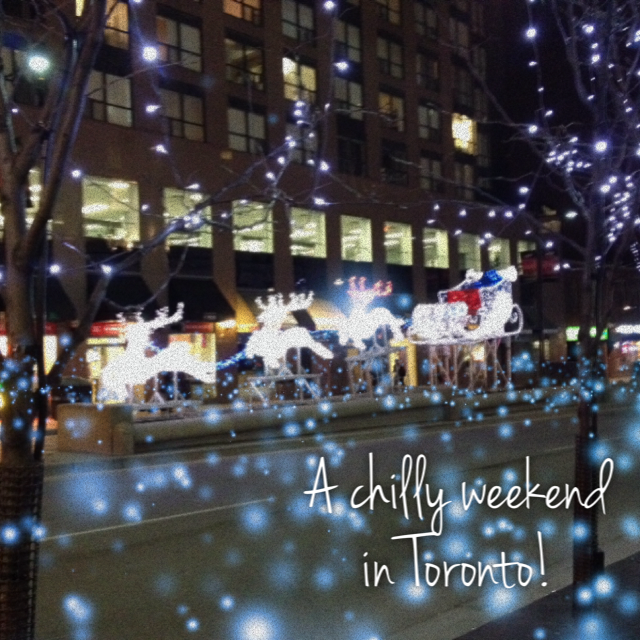 This past weekend, I travelled to Toronto with Shawn and our friends Kody and Annika to participate in the Toronto Santa Shuffle 5k race.  It was a lot of fun — you can read about our experience in yesterday’s post!  But the Santa Shuffle wasn’t the only fun thing we did while we were in the big city!

We stayed at the Courtyard Toronto Downtown, which is the largest Courtyard by Marriott hotel in the world.  The room was quite spacious, with two queen-sized beds (with tons of pillows!), a full bathroom with separate sink/dressing area, and free wi-fi.  The hotel also has a fitness centre with a lap pool and whirlpool, that we made good use of after the race!  It wasn’t fancy, but it was clean and certainly served our purpose!  My only complaint was that there was a rip in the fitted sheet on our bed. 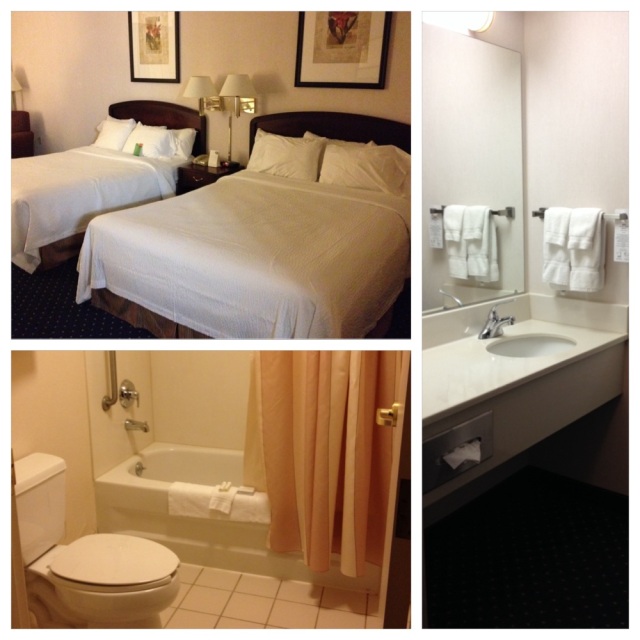 On Friday before the race, we had dinner at W Burger Bar.  It was within walking distance of the Courtyard and had awesome food and delicious “grown-up” milkshakes!  I had bruschetta, and everyone else had customizable burgers with all sorts of great toppings!

After the Santa Shuffle on Saturday, we were all starving and I had a hankering for some Mexican.  We had lunch at Burrito Bandidos at Young and College, again, just around the corner from the Courtyard.  It’s a tiny restaurant, reminiscent of my favourite Mexican place in NYC, San Loco.  Burrito Bandidos is known as “Toronto’s Best Burrito” and it’s easy to see why.  The burritos are massive (even the so-called “small” ones!), with your choice of protein, toppings, and sauce.  Annika had mango chicken, Kody had shrimp and steak mix, and Shawn and I had regular chicken.  I wasn’t able to finish my burrito, it was so big!  There are four locations in Toronto, so there will be one near wherever you are!

After lunch at Burrito Bandidos, we went back to our hotel for a very much-needed rest, so we could get ready for some shopping!  Annika and I hit up the Toronto Eaton Centre for over 200 stores worth of retail therapy.  We had great luck at Hot Topic, where I got a Peter Pan top and a Little Mermaid dress!  (I’m Disney obsessed.  It’s a problem.)  Annika got a really cute Hell Bunny halter dress — great label name, isn’t it?!

While us girls were shopping our brains out, Shawn and Kody went to one of Shawn’s favourite Toronto hangouts, The 3 Brewers, which is right across the street from the Eaton Centre.  It’s a restaurant and microbrewery all in one.  The building has three different levels with a winding staircase, which makes you feel like you’re exploring an old mansion (or maybe that’s just me!).  The 3 Brewers has about a zillion different types of beer on the menu, which changes seasonally, and served in a variety of sizes — including Shawn’s favourite, the LITRE.  It’s absolutely massive!  (So much for all that running we did!) Every time we go to Toronto, we find someplace new to explore and experience.  So get sharing — what’s your favourite Toronto hangout?  Leave your recommendations in the comments, so Shawn and I can check them out the next time we’re there!