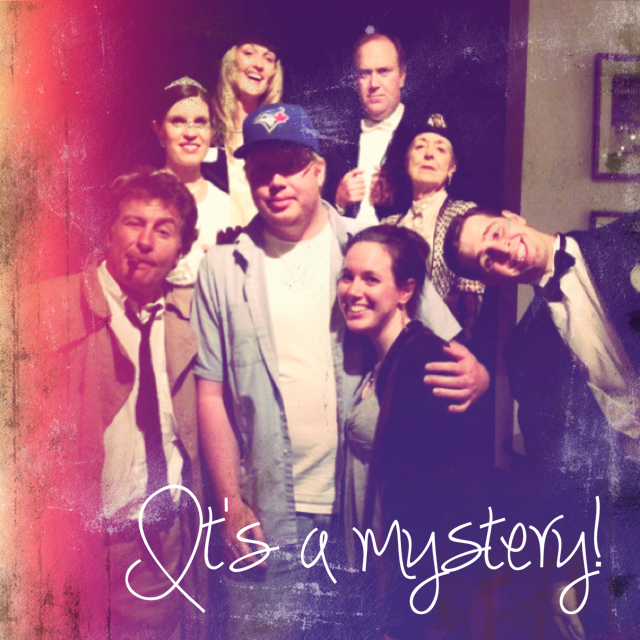 Shawn and I were invited a special VIP night for Mysteriously Yours Dinner Theatre‘s new production of Uptown Abbey on August 1.  I first heard about Mysteriously Yours while randomly searching online for murder mystery events way back in 2012, and had been invited to attend a performance in November but wasn’t able to go at that time.  Luckily, I was able to go this time, and jumped at the chance!

Mysteriously Yours has been a Toronto staple for 26 years!  They perform not only in their own theatre at 2026 Yonge Street, but also are available for hire for private functions — and they’ll customize the performance to your group!

So Shawn and I hopped in the car and made the trek to Toronto (travel to Toronto?  Twist our arms…).  We checked into One King West Hotel & Residence — what a great hotel.  Our suite was spacious and had a kitchenette — I could totally live there!

After checking in, we hopped on the subway to travel to the theatre.  I was excited — I used to perform with a murder mystery troupe here in London but Shawn had never attended anything like this before!

Lord Upton (the Earl of Duke) is running out of time… and  money.   And, with no male heir, his American wife, Abbey, is  desperately trying to marry off their daughters.  Things go from bad to worse when a body is discovered.

Was it one of the daughters? Lord or Lady Upton? The Dowager Countess? or… maybe the Butler  did it!

Come and join the fun, and see if Lieutenant Carumbo can solve the case before everything is turned Upside Downton, in this classic Drawing Room Mystery!

A hilarious spoof of the popular British TV Drama.

We arrived at the theatre and were seated with another couple, Jill and Dustin from LiveToronto (Dustin happened to be another former Walt Disney World cast member!  What are the odds?!).  I received a goodie bag too, packed with a Mysteriously Yours baseball cap, a travel mug, and tea!

The meal started with Beatles music and a pineapple rum slushy… so good!  We had a number of choices for dinner — I went with an appetizer of pulled BBQ beef with blue cheese dressing and salmon as my entrée, with an awesome chocolate cake for dessert!  The staff were super-nice and efficient — great service!  I loved the details everywhere, from the rich red curtains on the stage to the dagger design on the washroom doors!

During the meal, we were entertained by an amazing group of performers, who kept the event rolling with tons of laughs!  Every one of the performers was just fantastic — totally energetic, completely engaging, and never broke character, even when interacting with the audience members — and there is a lot of interaction!  Murder mysteries are not for the shy or faint of heart — the actors will come right up to you and start a conversation, no matter how much you try to hide!

At the end of the night, it’s up to YOU to figure out whodunit!  There are prizes to be won for the people who figure out the mystery!  I won’t spoil the show for you — you’ll have to see it yourself!  With an easy to remember phone number (1-800-NOT-DEAD), you best get to booking tickets!  I think this would be a wonderful idea for a date night, a birthday party, or a company outing. 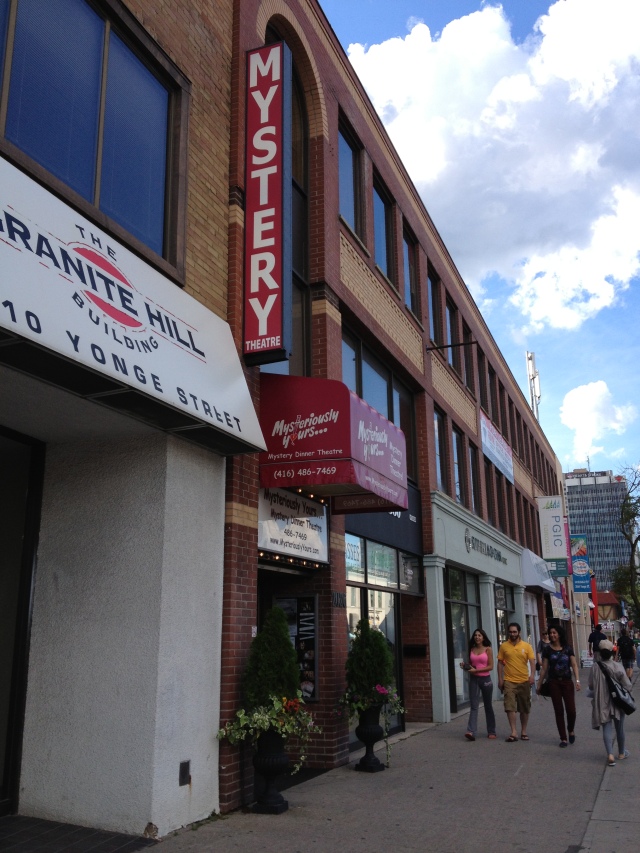 Disclaimer: I was invited to attend the Mysteriously Yours event free of charge.  Hotel was booked through Hotwire.com.  All opinions are my own.  Photos taken by me with my iPhone.