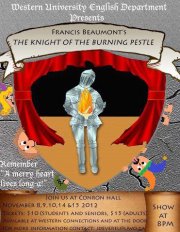 The Knight of the Burning Pestle by Francis Beaumont Western University’s Department of English
November 8th, 9th, 10th, 14th, & 15th @ 8:00 pm
Conron Hall (University College, Room 224)
Tickets: $10 for students and seniors, $15 for adults, available at Western Connections in the UCC, as well as at the door each night

Summary: Francis Beaumont’s hilarious comedy-turned-mock-heroic-drama, “The Knight of the Burning Pestle” involves a London merchant’s daughter and the inevitable tension that comes with love and the hierarchical standards of social class. The merchant’s daughter elopes with his apprentice and endeavors to escape her father’s discontent, only to be caught by him. Her father’s triumph in capturing her is squandered as his clever apprentice schemes to be reunited with his love. Alongside this action, two “play-goers”, a grocer and his wife, provide a metatheatrical take on the play as they declare themselves to be chief commentators of the performance, often (and rowdily) voicing their prejudices and adjusting the central plot to their tastes. The grocer willingly inserts his own apprentice within the play, not minding that players are now driven to improvise their plotline as their adventures are relentlessly interrupted by the grocer’s own intrigues. 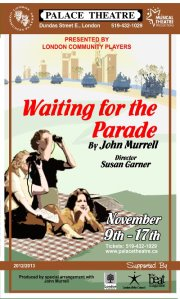 Summary: One of country’s most enduring and best-loved plays, “Waiting for the Parade” explores the lives of five Canadian women on the homefront during WWII. Through these classic characters, John Murrell explores the secrets, tensions, struggles and quiet unsung heroism of these women who kept “the home fires burning.” Winner of the Chalmers Best Play Award.

Summary: The final show in their fifth season of award winning theatre in London, Passionfool Theatre, resident company of The ARTS Project, is proud to present a piece by one of the most celebrated American playwrights of the last century. Arthur Miller’s astounding and searing play, The Crucible, set in the context of the 17th-Century Salem witch trials, pulses with the destructiveness of socially sanctioned violence, the power of hysteria, the blindness of zealots, and the heart of one tortured man trying to find his own goodness. Written in reaction to the McCarthyism of the 1950’s, The Crucible’s depiction of a society unhinged by fear and vengeance remains as shockingly relevant today as it did sixty years ago.

Summary: Ah, Shakespeare in the… Old West?! The lovely Sunny Day arrives in the small mining town of Gravel Gulch with a troupe of actors determined to bring culture to the locals. Unfortunately, the troupe of actors, headed by the conceited and shady Noble Hart, is enough to make a playwright cry. The troupe’s arrival thrills the townspeople, except Abagail Pettigrew, the richest person in town. She’s harbouring a dark secret about her former occupation… With more would-be outlaws, stranded performing artists, heroes and heroines, and a surprise ending, our audiences will be cheering, booing and holding their sides with laughter in this wild theatrical bonanza! (G)