I’m excited to be able to share this amazing new banner for Empty Space Productions’ upcoming production of From Women’s Eyes, designed by Amanda VanDeven of VenDesigns. I’ve been working on this project since the beginning of September, and it’s been a great opportunity to work with some amazing London actresses and to play some roles I might not get to play otherwise!

From Women’s Eyes is only playing for three days, so I hope you’ll make it out to see the show! Details below!

From women’s eyes this doctrine I derive:
They sparkle still the right Promethean fire;
They are the books, the arts, the academes,
That show, contain and nourish all the world.

During the wake after the passing of a dear friend, a group of women start to pack up her attic where they find memories of the lives they’ve shared. As they sift through the books, photos and debris, they relive,commemorate, grieve and above all, play.

Built from over twenty canonical pieces, From Women’s Eyes celebrates and explores the relationships women have with each other and the world around them through some of the best of Shakespeare’s female characters.

Performing at The ARTS Project – 203 Dundas Street, London ON 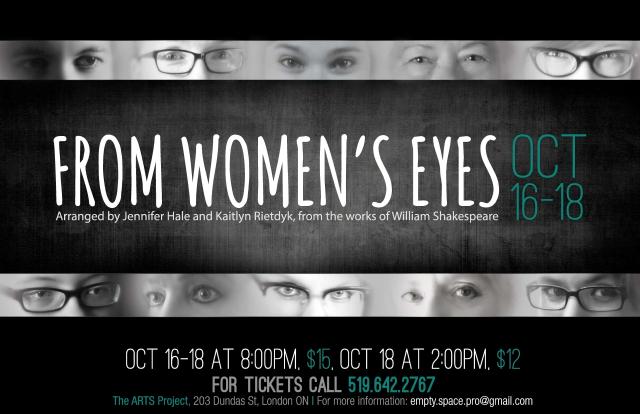