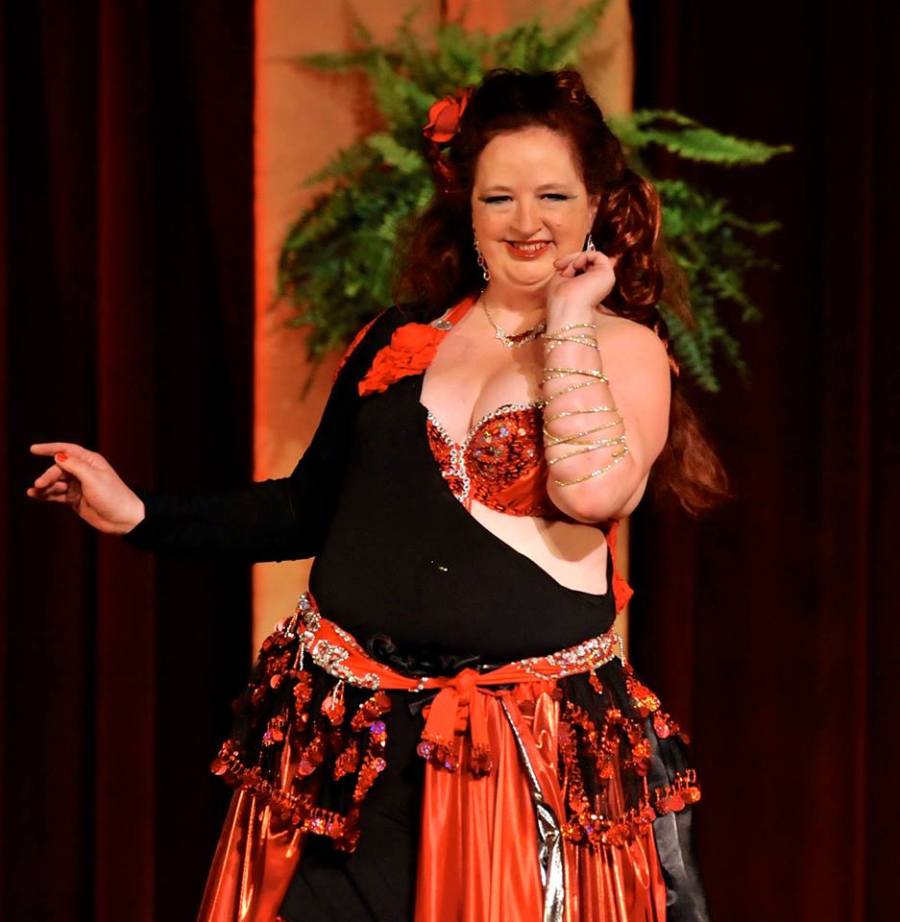 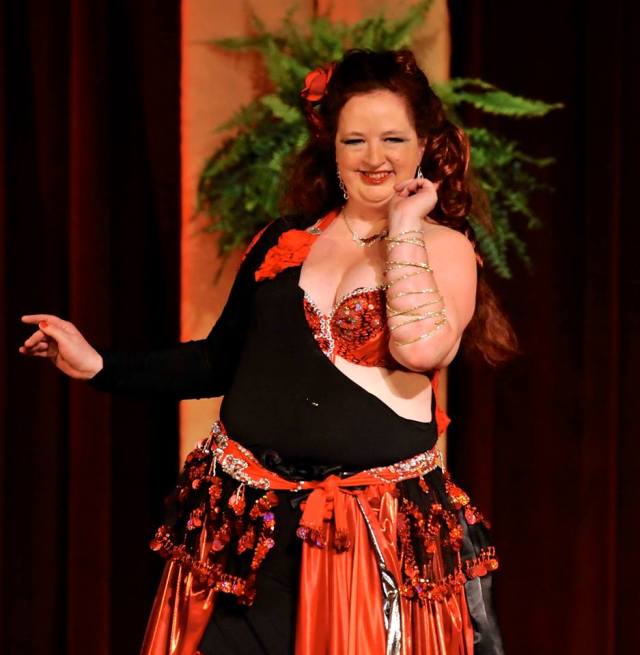 I met Shanna Mandell online through a mutual friend, and when she told me she was a bellydancer, I definitely had to know more! I was thrilled to learn more about Shanna’s experience as a performer and instructor in this beautiful style of dance. Read on to find out more!

Hi, I am Shanna from Pittsburgh. I am a Middle Eastern Cabaret style performer and instructor. I am the most senior (bellydance wise) member of the Pittsburgh Bellydance Academy student troupe Faraatha (which is Arabic for Butterfly or Moth).

I have always loved dance. As a little girl, we could not afford for me to take dance classes. In high school I took dance in my junior year. My junior year was also the year of World History and I briefly read about dance in the Middle Eastern cultures. In college, a friend wanted to start bellydancing as part of a medieval recreation group but things did not go very far. Finally, around six years ago when I joined my current real-world employer, we have a gym and several of my co-workers suggested that before I went postal I should start to go to the gym. There was a bellydance class and every since then I have been hooked. My first teacher was Mahira of Hawaii (there was another Mahira when she moved here from Hawaii after her husband retired from the Navy).

Now I have studied with many of the superstars of the art form. In fact, I am finally answering these questions at the airport on my way home from a dance conference, where I studied from not only U.S. dancers but also an Egyptian dance master (instead of an Egyptian dance mistress because governments be horrid). I really love that this art form has allowed me to travel not only for classes but also for intensives and festivals where I meet many more dancers of all experiences and walks of life.

So far my favorite dance projects are my four current choreographies and costume designs to go with them. I am working on a fan veil to Lindsey Stirling’s “Take Flight,” a skirt to Blackmore’s Night’s “Song and Dance pt.2,” The Weeknd’s “You Earned It” and Emilie Autumn’s “Dominant.” I think perhaps sword and fan veil is in order for this last one.

Now my favorite performance is always Halloween because we can be very silly and it is perfectly acceptable and really kind of encouraged. Last year Faraatha did a dance dressed as moths and we told the legend of the moth people; a Navajo Indian legend about people who went mad when their god stepped away and they began to inbreed like crazy and would run into flames because they were crazy inbred people.

Do you have a “war story” from your performing past that you’d be willing to share?

Right now I am living my war story. I have been fighting inflamed cartilage in my knees and now I have a strained ankle. Those are not a big deal because I can slow down when things get too painful. The real fight is with my self esteem that took a blow when someone made me feel like I was not a good dancer. Here is the thing, I have had hardly any formal dance training until I was an adult and to make things more fun I am actually dyslexic. Not severely, mind you but I still have that learning block a bit. I left that person and now I am fighting to get that confidence back. Last year when I competed in Dallas and Pittsburgh I felt better as a dancer. I mean I danced with a live band to a song I did not know I was dancing to until a few hours before.

This last year and a half has been helping a ton between not dancing to songs that make me want to burst my ear drums on first listen and my two life and dance coaches Veronica Varlow and Sherena of Ohio. I am now allowed to be dark and mysterious when I so desire. I would much rather hear “You are a beautiful dancer” than “I don’t understand why you are not getting this choreography (that has been changed twice in the last three weeks)” because the latter just makes me feel more like a failure and chips away at my passion. I started to lose that passion with the person I left because she would tell me I need to lose weight, and to make things worse she could not even be honest with me that she wanted to take the three other girls to this gig… Instead she just would have “secret practices.” I should have left after that incident; instead, I stayed a few more months until I could come up with a rather lame excuse to stop going to her class.

My troupe is hosting a show on September 19, 2015 at the Pittsburgh Dance Center in the Bloomfield neighborhood of Pittsburgh. My troupe will be performing at the annual Kaffif Halloween Hafla on October 29, 2015, and then there is the Pittsburgh Bellydance Festival and Competition from November 6th to the 8th, 2015. As well, I teach at Sterling Yoga on Fridays starting the first Friday in October.

My goals for the coming future are to learn and perform all four choreographies and compete at a few festivals in 2016. I will also perform with one of the live bands and maybe even learn to drum. For now it is to just enjoy being in a troupe that loves each other (most of the time), as well as taking many workshops and just learning to love myself and realize I am a pretty awesome dancer when I put my mind to it.

My advice to anyone who wants to pursue Middle Eastern dance is to find a teacher that is the right fit for you. Learn about all the styles before settling into one but still take classes that are not in your “style” because you might learn a new move that can be modified to your chosen style. Cross train in Western dance forms because West is meeting East more and more. Also, learn the culture of the dance because this is an ancient art form that is older than all the Western forms.

The best advice is to NEVER stop learning. I have been in workshops where some of the students are the top dancers in the world. Just yesterday I turned around in a workshop to see four of the fusion instructors also taking the workshop. Though my favorite moment was standing behind Victoria Teal of Virginia, Lisa Zahiya of North Carolina, Aziza of Montreal, Rosa Noreen of Maine and Kata Maya of Texas in a workshop.

Where can we find you online? 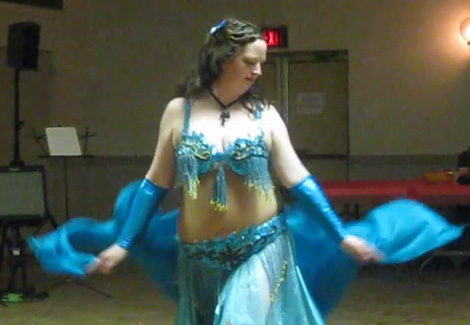 Thank you so much for sharing, Shanna!