30 is a big birthday, and I think it’s perfectly understandable to want to celebrate in style.  My colleague Jeff spent his 30th birthday in New York City earlier this month, so not to be outdone, I jetted off to Chicago to spend my 30th birthday with my wonderful fiancé Shawn.

Well, jetted isn’t exactly the word… we drove to Dearborn, Michigan, and took the Amtrak through Michigan and Indiana to Chicago.  We looked into flying, but flights to Chicago were ridiculously expensive!  So, train it was.

We stayed at the Allerton Hotel Chicago.  It’s right on Magnificent Mile (which is packed with excellent stores… we were directly across the street from the Apple store, and kitty corner from Zara!) which is close to everything.  The main entrance always had jazz music playing… so classy!  We were checked in by a lovely man named Russell, who upgraded our room and gave us free drink tickets when I told him it was my birthday!

We were STARVING after the train ride so we went to the Hard Rock Café for dinner, which is a tradition for us when travelling.  We always come home with some sort of barware (this time it was a hurricane glass) and an HRC pin each.  (I really need to get on with sewing those pin banners for us to actually display all the pins we’ve collected!)  I ordered a drink called a “Roadie” which was packed full of maraschino cherries and cherry bourbon.  It was really strong and really sweet!  We ended up going back to the hotel and crashed for a few hours… then woke up at about 11:45 and decided we were hungry again!  So we went for a little adventure stroll… but everything was closed!  (Granted, it was midnight on a Thursday!)  So, off to Walgreens for sugary goodies and beverages!  So classy.  *sarcasm!*

Friday was my actual birthday!  We had breakfast buffet at the M Avenue Restaurant in the hotel (they had these amazing apple-stuffed rolled pancakes!) and then headed off to Millennium Park to see Cloud Gate, aka “The Bean” and all the beautiful architecture.  We kept walking and taking photos of everything we saw, although I was silly and was taking photos with my iPod instead of my camera!  We saw the Crown Fountain, although it wasn’t turned on and it was hard to see the faces because it was so sunny.  It’s probably best to see it at night or when it’s overcast. 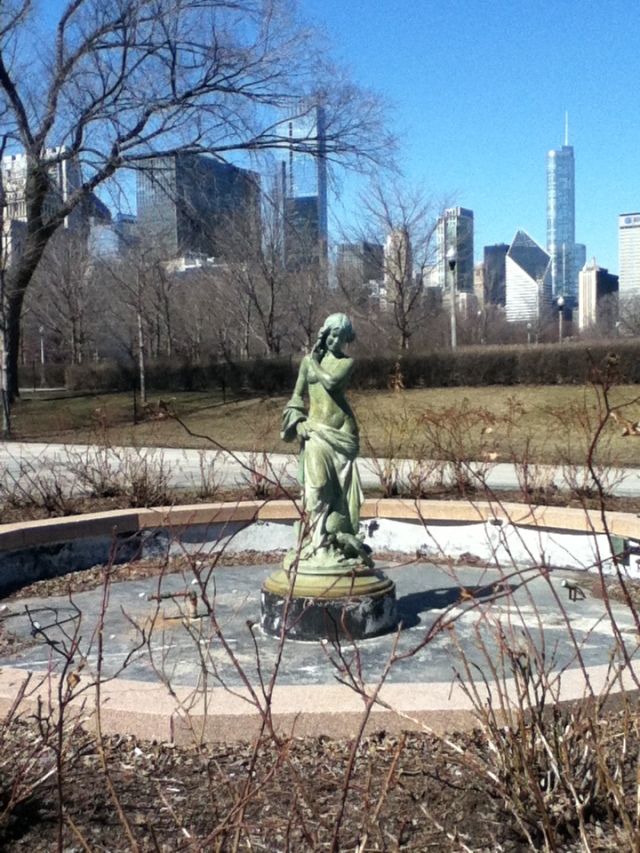 The lovely thing about the Magnificent Mile and The Loop areas of Chicago is that they’re very walkable.  We walked all the way to the Shedd Aquarium, which was highly recommended by everyone I spoke to.  The aquarium was beautiful, full of all sorts of species of fish.  Anytime I’m in a zoo or aquarium, I’m always astounded at the thousands and thousands of species of animals there are in the world!  The aquarium also had sharks, rays, frogs, lizards, turtles, otters, a HUGE anaconda (it had to be as big around as a dinner plate) and even a family of monkeys in the Amazon area!  We tried to see the octopus but it was hiding!  What weren’t hiding were the eels — they are TERRIFYING and would jump out at you from their hiding places as you walked by!  (Well, they didn’t jump… I can’t think of the word to describe what they did!  Slither doesn’t sound right because they are crazy fast!)  I loved the starfish and the seahorses too!  They also had pressed penny machines, so of course I had to get one.

That evening, we had tickets to see Julius Caesar, presented by the Babes With Blades Theatre Company!  I have been dying to see one of their shows ever since I heard about the company!  Get this — it’s an all-female stage combat company.  Amazing!!!  The company began in 1997 as a means for the members to create their own opportunities, in the hope of inspiring others to do likewise.  They are a not-for-profit, charitable organization dedicated to using stage combat to place women and their stories centre stage.  I think the Babes are fantastic.  I had sent them a Facebook message, and they remembered me, because when I handed in my ticket, I was greeted by the Artistic Director of the company, Leigh Barrett, with “You’re Kerry from Canada!”  Awesome!

The show was excellent.  What a troupe of talented ladies.  The fights were exciting and creative (the beating of Cinna the Poet was brutal) and I was fully engaged the entire show.  The actresses playing Brutus and Casca were standouts for me.  Julius Caesar runs until April 20, so you should definitely make the trek to Chicago and check the Babes out!

After the show, we went to Pizzeria Due for a late dinner.  Chicago is famous for deep-dish pizza, so of course we had to try it.  And it was AMAZING!  It had a crispy, buttery crust and tons of sauce, cheese and toppings, and it wasn’t greasy at all.  Real Chicago deep-dish pizza puts all other pizza to shame!  Be forewarned if you go, it takes 45 minutes to properly cook, so you might want to order an appetizer.  And of course it’s super-filling — a small was the perfect size for Shawn and I, and he’s a hungry guy!

Saturday morning we woke up late, watched the end of Bill and Ted’s Excellent Adventure and the beginning of Legally Blonde.  We missed breakfast so we headed to Gino’s East Chicago (which is right around the corner from the Allerton) for MORE deep-dish pizza for lunch!  Pretty much obsessed now!  The really cool thing about Gino’s East is the graffiti all over the walls — according to one of the waitresses, someone signed their name on the wall and it became a thing for everyone to do!  I made sure to add our mark to the wall too!

Saturday afternoon was devoted to Navy Pier!  Navy Pier is a 3,300-foot long pier on the shoreline of Lake Michigan.  The pier was built in 1916 at a cost of $4.5 million!  It’s full of shops, restaurants, and lots of fun things to do!  Shawn and I went up on the Ferris wheel, checked out all the stores (including Build-A-Bear Workshop!), listened to a jazz band, got another pressed penny for my collection (pins and pressed pennies… I collect weird things, I know!) and checked out the Museum of Stained Glass and the Chicago Sports Museum at Harry Caray’s.  Shawn was really excited to find a display devoted to Harold Ramis (he’s a HUGE Ghostbuster’s fan!) and I was excited to see all the Chicago Blackhawks memorabilia!

That evening we went to the John Hancock Building for late-night drinks in the café up on the 95th floor!  The views are gorgeous (especially from the women’s bathroom!) and the drinks were great.  I got a peach Bellini, and 10% of each sale of that particular drink goes to a different Chicago charity each month!  That month they were raising money for a local park.  Drinking for charity… not a bad idea!  We also ordered what we thought was an salmon and avocado appetizer, but it turned out to be a sandwich!  LOL!  It took so long coming from the kitchen that the server gave it to us for free.  Bonus!  It was served with kettle chips and was delicious — fanciest sandwich I’ve ever had!

We had to catch the train on Sunday afternoon at 12:40, so we had another breakfast buffet… this time instead of stuffed pancakes, they had French toast with maple syrup… my favourite!  The train ride felt longer coming back, probably due to the fact that I slept most of the way to Chicago, and I had started my reading deprivation for The Artist’s Way, so I spent a lot of the time alternately writing and sort-of-napping.  Chicago also has a one-hour time change from Ontario, which doesn’t seem like a lot, but it can confuse your system!  Once we got back to Michigan, we had an insanely long wait at the border but eventually crossed it, and we got home around 10:30 at night.

Normally when I’m on vacation I’m all “VACATION FOREVER!” at the end, but by the end of this trip, I was ready to come home.  Not sure why.  Chicago reminded me a lot of Toronto… perhaps it felt a little less like a vacation for that reason?  Either way, it was lovely to take a trip away, and a great memory for me to look back on.  Where shall we visit next?!