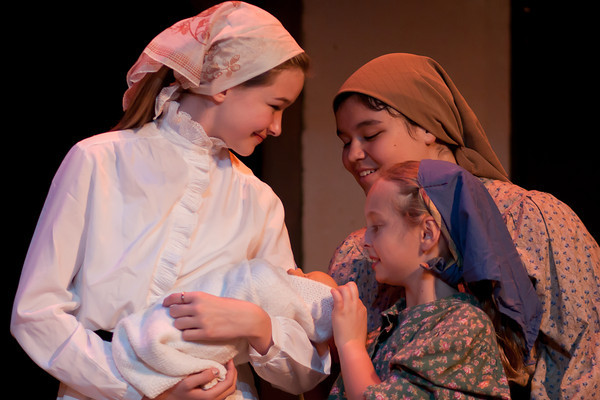 1.  They listen to and respect the costume team.  They don’t reject a costume because they don’t like it. They let costume staff know how they need to be able to move, where they may need help with a quick change, they listen when we talk about what is right in hair & make up for their time period and character.  When the costume team asks them to bring in a costume piece from home (like dress pants or black shoes), they bring it in on time and clearly labelled with their name.  (From Ellen Mallett – @elanknits)

3.  They don’t whine and/or complain.  Period.  I’ve known actors who have complained that their part isn’t big enough or they don’t have many lines.  I’ve also known actors who have whined about the fact that they have a huge part and tons of lines to learn!  (Directors: we can’t win, can we?!)  Actors, I know that you’re tired/stressed/hungry/have tons of homework/don’t like your costume/would rather be going to a birthday party.  Believe me, I’ve been there.  But bringing that negativity to rehearsal only brings down everyone, including yourself.  Great actors leave their baggage at the door.  Literally and figuratively.

4.  They focus on more than just memorizing their lines.  Anyone can go onstage and recite lines.  A highly effective actor goes beyond memorization and actually ACTS.  (Fancy that, eh?)  They think about their character, and make intelligent decisions.  Why is my character doing what they’re doing?  How would my character react to this?  Is my character really just pure evil, or is there something else going on?  They ask intelligent questions to the director, and really focus on creating a living, breathing character onstage.

5.  They pay attention to detail.  They remember to point their toes and extend their fingers when dancing.  They enunciate and separate their words.  They project their voices.  They don’t look at the floor.  (Unless, of course, they are directed to!)  They put on every piece of their costume the way they are instructed to.  They know not to wear white socks with a black suit and dress shoes.  😛

6.  They take care of themselves outside of rehearsal.  Especially at this time of year, when colds and flu are prevalent.  They make sure to eat nutritious food and drink lots of water.  They get adequate amounts of sleep.   They wash their hands frequently.  They let their director and parents know when they’re feeling sick and get proper medical attention right away so they aren’t sick during show week.  They do their best to attend every rehearsal, but make sure to stay home and rest and not spread their germs to the rest of the cast if they are contageous.

7.  They are willing to make the tough choices and sacrifices.  They understand that they may have to be late to a birthday party, or miss a movie date, or reschedule a sleepover so they can honour their commitment to be at all rehearsals and performances.  They know that they can’t scream their guts out at the *insert current popular musician here* concert or at the homecoming football game the day before they have to sing their big solo.  They know that they need to plan ahead and get their homework done so they can be focused at rehearsal.

Do you have some highly effective habits?  Share them in the comments!