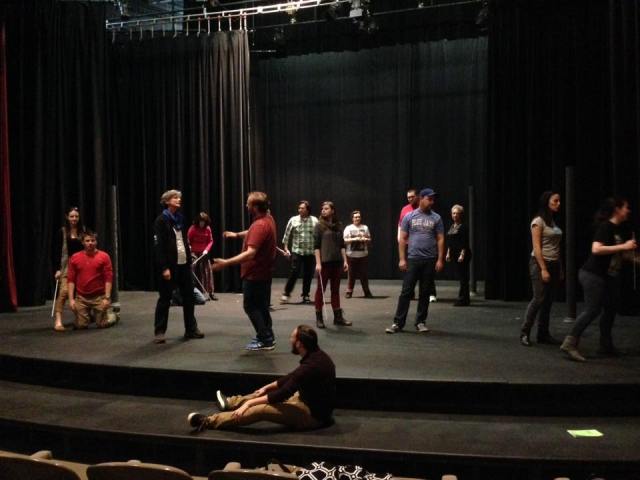 I’m currently acting as Assistant Fight Director (AFD) for London Community Players’ production of The Trials of Robin Hood, a very funny retelling of the classic Robin Hood adventures through three different perspectives: Robin Hood, Maid Marian, and the Sheriff of Nottingham. And, of course, this show has LOTS of stage combat. The fight director is Brian “Brock” Brockenshire of Shrew’d Business, and I’ve been working with Brock for five years now, going back to LCP’s production of The Three Musketeers, so I’m glad to be working with him again on another great show!

I absolutely love stage combat, and getting to develop my skills as a “fight director in training” has been fantastic. An assistant fight director’s role is exactly what it sounds like: to assist the fight director in whatever needs doing to tell the story of the show, while ensuring the cast and crew’s safety at all times. It’s a great way to learn more about the craft of stage combat (I’m like a Padawan!), and it’s crazy fun as well.

Here are some of the things I’ve been doing so far during my journey as Assistant Fight Director for this production.

This is important stuff that all actors need to know in order to perform combat choreography safely and accurately. I will often act as a “crash test dummy” and get “beaten up” by Brock in order to demonstrate new moves, and watch the actors as they practice the moves.

2. Helping to teach and review the Fight Director’s choreography.

I frequently am one half of the pair of combatants (the other being Brock) who demonstrate the fight to the actors, so they can see what the fight will look like. I have to learn various pieces of choreography (often right at that moment!) so I can accurately demonstrate what attacks and parries will be performed. For this show, we are doing lots of unarmed combat, as well as lots of weapon work including found objects, bows and arrows, various swords and daggers, a mace, and quarterstaffs, so I have to be proficient enough with all these weapons to be able to demonstrate the moves correctly!

As well, to save time, we will often split the cast up into smaller groups and Brock will give me some pre-assigned choreography to teach. After some practice time, we’ll bring the group back together and see how the parts go together. This is also useful for reviewing choreography that’s already been taught — some of the group will go with Brock, some with me, and we can get twice the amount of work done at the same time.

3. Working with the Fight Captain.

The Fight Captain assists the FD and AFD, and is in charge of combat once the show opens. He or she runs fight calls before the show, maintains the weapons, and acts as liaison if there are any issues that need to be addressed with the FD. I was Fight Captain for LCP’s production of Treasure Island a few years ago, and it was just Brock and myself working on the fights. Brock mentioned that it’s been some time since he’s worked with both an AFD and a Fight Captain, and I’m really glad that more people are becoming interested in fight direction. The fight captain for TORH is Dustin Didham, who I first met when I was shadowing Brock while he (Brock) was teaching combat for a local production of Macbeth. Dustin played Macduff (something we have in common) in that production and loves stage combat too, so it’s a great learning experience for the both of us.

4. Jumping in and learning choreography for/with actors and being a stand-in for a missing body for actors to fight around.

With a cast of 38 people, there is often at least one person missing, so frequently I’ve had to stand in for that missing actor and have their combat partner call out the sword moves so I can be their missing person. It’s useful for that person because it really cements their choreography in their head (you know you know something well when you can teach it to others!) and it’s good for me to practice learning choreography quickly. I’ve also been a stand-in when combat needs to happen “to” or “around” someone; for example, if someone needs to be carried offstage, I’ll normally go first and be the “body” to ensure the move is safe. Or, if combat needs to occur around an actor, again, I’ll stand in for that actor the first time, so they can see how they need to move or avoid getting in the way.

With video recording being so easily accessible, it’s a great reference tool for actors, as well as a good record for demo reels. One night in particular, Brock and I filmed five or six different choreography patterns for the actors to refer to. (I’m pretty sure I thought my head was going to explode after that.)

We have a couple of lefties in our cast, and (as any fan of The Princess Bride knows) it’s a good skill to have.

7. Watching fights and checking angles/weirdness (aka, being a second set of eyes).

We have a large number of big group fights in the show, and it’s useful to have a second person watching the fights to watch for things like weird timing, “air” (being able to see that the attack is clearly fake), missed knaps, potential danger, or anything else going on that the Fight Director might not be able to see, as they’re watching out for a million other things. Even when it’s a smaller fight, it’s useful to have a second set of eyes watching from a different angle — something that looks great from audience left might look terrible from audience right.

Again, we’re dealing with a cast of 38. It gets noisy. Sometimes the AFD gets to play “bad cop” and tell people to pipe down! I also assist with making sure the deck is clean and free of debris, and helping to tidy up the rehearsal hall after rehearsal is over.

Pretty self-explanatory. We haven’t worked much with actual swords yet (that’s coming really soon!) so in the meantime we’re working with sword stand-ins. I help keep the weapons in good condition and keep them sorted after the rehearsal is over. Once the show opens, that will be Dustin’s responsibility.

Sometimes FDs will delegate a fight sequence to their AFD, either because they have too much to do themselves, or wish to give the AFD the opportunity to develop their choreography skills (oftentimes, both are the case). For TORH, Brock assigned me a giant, comedic melee consisting of some kick-ass nuns and townswomen beating up a goofy gang of Merry Men (in the Sheriff’s rendition of the story, the Merry Men are a bunch of dimwits) and over half the cast is in this fight! Not to mention that partway through choreographing the fight, we realized that one of the female actors was not present, so we had to add in an extra Merry Man for her to fight, and I stood in for the missing fighter for part of the rehearsal!

When choreographing a piece of violence, you need to ensure that what you’re making serves the story. So I made sure to find out what the director, Ceris Thomas, wanted the fight to look like and achieve. What weapons (if any) were to be used? Who would win? How long should the fight take? (All these questions will be answered in the show… so be sure to check it out!)