Well folks, it’s that time again!  I think I say this for every show I direct, but it’s hard to believe that OKTC’s Through the Looking Glass opens tomorrow.  It feels like we just started rehearsing; when in actuality we started way back in April.  I am SO PROUD of the hard work that my cast and crew has done.  They have improved in leaps and bounds and you really need to come see what they have done with this show.  It’s silly, funny, and fun for the whole family.

We were also featured on the London Free Press, alongside OKTC’s other summer production, Disney’s Alice in Wonderland Jr.!  Check it out!

Through the Looking Glass

Book by James Devita. Music and lyrics by Bill Francoeur.
Based on the story by Lewis Carroll.

Part of our Summer in Wonderland Series. Take a wildly entertaining trip through Alice’s looking glass to the beat of a hip-hopping soundtrack!  This comic adaptation of Lewis Carroll’s Through the Looking Glass depicts the coming-of-age story with fun twists and awesome music.  You’ll recognize some of your favourite Looking Glass characters and meet dozens of new ones along Alice’s journey.  As a pawn from the second square of the chessboard, Alice must travel to the eighth square to accomplish her goal of becoming a queen.  Each step of her passage brings her face to face with new characters and adventures as well as celebrations when she achieves each aspiration.

You have 8 chances to see Through the Looking Glass before it’s gone! 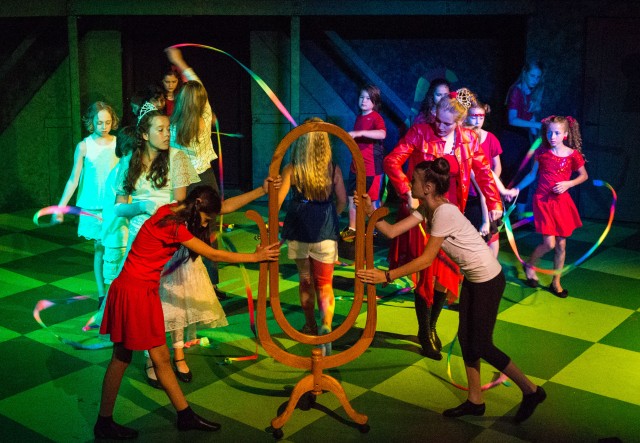