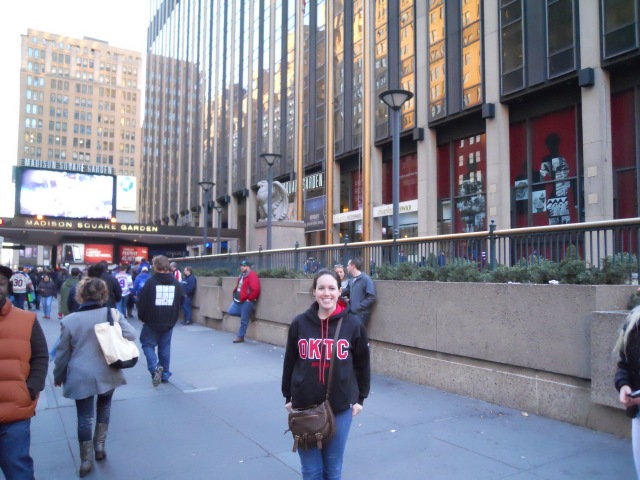 It’s been awhile since I’ve posted any of my bucket list items… because I haven’t been actively achieving them.   Eek.  I need to get at it!  However, during my recent trip to New York City with OKTC, I was able to cross an item off my list: seeing a live NHL game!

I actually had the game booked before Christmas; my boss Dale texted me one day and said that he could get tickets to either NY Rangers vs NY Islanders, or NY Rangers vs Carolina Hurricanes for when we were there.  Clearly, the NY/NY battle was too good an opportunity to pass up!

We ended up in the wheelchair section, which wasn’t so bad because we had video monitors in front of our seats so we could see instant replays! 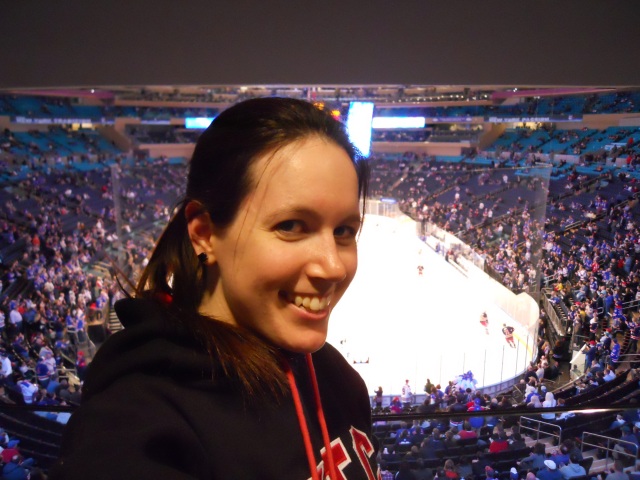 The view from my seat!

It was an exciting game — the Islanders scored the first goal but the Rangers came back to win it in overtime with only 5 seconds left on the clock.  Final score was 4-3.

I should have eaten something before the game, but I didn’t and was subjected to purchasing a $6 chicken hot dog.  I also purchased a Rangers season program which set me back another $6 and I will probably never look at it again, but I thought I should commemorate my first NHL game with some sort of souvenir?

There’s quite an intense rivalry between Islanders and Rangers fans.  There was even a fight in the stands between a Rangers fan and an Islanders fan!  The Islanders fan and her man were ejected from the arena, which was pretty funny.  Dale also spotted a guy wearing a Reimer jersey… you just can’t get away from those Maple Leafs fans!

So there you have it, folks.  Number 53, see a live NHL game, is COMPLETE!